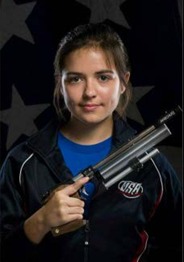 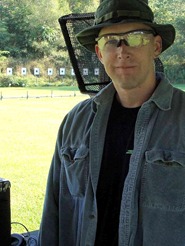 Irina Andrianova, a competitive Junior Shooter at Southport Masters, is

Olympics) in both the air and sport pistol categories.  The USA Junior Team

consists of 25 members, of which three are young women pistol shooters.  There

are 38 countries participating in this event. Follow her progress by clicking here.

Heights, IL.  Irina finished 36th out of 78 in Air Pistol, 30th in Sport Pistol and earned

a Silver Medal with her team in the Air Pistol Competition.

Congratulations to Irina and her team in the Junior World Cup!

competitive events.  Chris is also a member of the Lead Slinger club in Illinois.

Camp Perry was a lot of fun for me.  Just a little more fun than the 2007 I shot

at Valparaiso, IN on Sunday on my way out to Camp Perry.  I was doing well and

Anyway, the Nationals also went very well.  Just to get even with me for firing

my first 2650 score, the Pistol Gods had me shooting next to and scoring GSgt Brian Zins USMC (six time national champion).

Rimfire day had the Masters shooting at 7:30 in the morning and the conditions were perfect; overcast and no wind.  I shot 886-43x which was good enough for 4th in High Master Civilian.  Winning score was SSgt James Henderson USAR with an unbelievable 897-60x.

Centerfire day had he Masters shooting at 1:00 pm and the wind was howling.  I was fortunate enough to shoot some good slowfire targets and finished 3rd overall with an 873-39x.  Winning score was 878-43x.  Great scores of such windy conditions.

Making Master in One Year

Gun Trophies in the club's pistol leagues.  Congratulations to our actual and very 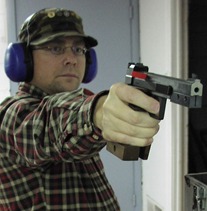